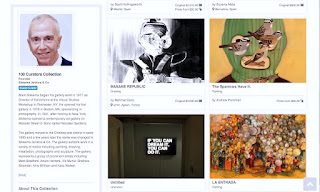 Brent Sikkema began his gallery work in 1971 as Director of Exhibitions at the Visual Studies Workshop in Rochester, NY. He opened his first gallery in 1976 in Boston, MA, specializing in photography. In 1991, after moving to New York, Sikkema opened a contemporary art gallery on Wooster Street in Soho called Wooster Gardens.

The gallery moved to the Chelsea arts district in early 1999 and a few years later the name was changed to Sikkema Jenkins & Co. The gallery exhibits work in a variety of media including painting, drawing, installation, photography and sculpture. The gallery represents a group of prominent artists including Mark Bradford, Arturo Herrera, Vik Muniz, Shahzia Sikander, Amy Sillman and Kara Walker.

Description: '100 Curators 100 Days' is a major initiative that recognizes talented emerging artists from around the world. It was developed by Rebecca Wilson, Director of the Saatchi Gallery, London and is the inaugural exhibit under the helm of Saatchi Online's new CEO, Margo Spiritus. Each day for 100 days, work selected by curators from the world's most prestigious museums and galleries will be revealed. [less]