The Lion and the Donkey 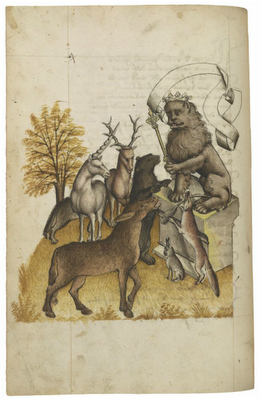 This lengthy poem, a collection of allegorical and moralizing tales drawn from the Bible, Aesop, bestiaries, and other sources, is titled Der Renner (The Runner), as Trimberg intended it to travel throughout Germany. In the image on the left, the lion has been elected king of the animals and has assembled them to report to him their names and ancestries. Attempting to hide his humble origins, the donkey is cagey about his lineage. The fox finally speaks up and reveals that the donkey owned by the baker is the donkey’s father: “faithfulness and simplicity dwell in [his father], and he supports himself by honest toil and to no one does any harm.” There is no shame in admitting one’s humble origins.