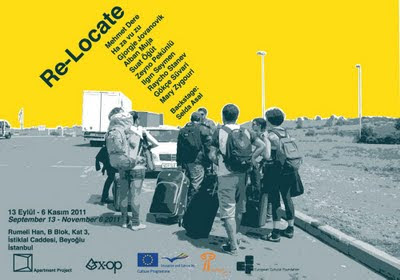 The theoretical framework of the Re- Locate project is based on the population exchange between Anatolia and the Balkans and it focuses on the flexibility of the borders, cultural similarities, controversies, the lack of communication between cultures, as well as various methods of developing new communication models. In addition, the project aims at establishing a new network between artists, curators, writers and institutions by making the shared history in the selected places its most important guide. This network also intends to form a dialogue between peripheral places, small-scale cultural centers, and artists.


Re- Locate Project proposes an experimental workshop practice that is based on mobility and translocation. The suggested mobility tries to en- compass the physical transitivity of the cities and borders, as well as the flexibility of historical, identitarian, and ideological borders.


Re- Locate project consists of a series of workshops that are realized in this framework. The first part of the series is realized in Plovidiv, Athens, Skopje, Prizren, and Pristine with the participation of Gökçe Süvari, Ha za vu zu (Özgür Erkök, Güneş Terkol), Ilgın Seymen, Mehmet Dere, Suat Öğüt, and Zeyno Pekünlü. The group worked in collaboration with the local artists in the places that they visited. They worked on both their individual works and collective works and shared their experiences with each other.


The second workshop is realized in Istanbul with the participation of the artists who were invited to Istanbul from the places that are visited: Alban Muja, Gjorgje Jovanovik, Mary Zygoury, and Raycho Stanev.
The third workshop, after the visiting artists have left, was based on dis- cussing the ways in which different works will be put together for the exhibition and the collective preparation of the book which was thought to be an alternative method to share the experiences with the audience.


Selda Asal, together with Gökçe Süvari, coordinated the project since the beginning; she also documented various spontaneous moments, momentary inputs of information and experience during the whole project. These documentations follow the project step by step and show it to the
audience in a non-conventional way. This method suggests that the exhibition should be read not only through the final results but also through the whole process of realizing it.


The dialogue that was established with people in the visited places is a significant step in making the already existing links more visible than be- fore. The meetings and conversations during the workshops are crucial in figuring out the strategies of survival and artistic production that the artists who are geographically close use, as well as learning the ways in which they perceive their surroundings and other similarities between geographies. All these concerns inspire us to put forward alternative answers to the question: “what else brings us together apart from geography?” and to develop new ways of communicating.


Re- Locate project can be seen as a step to share these experiences with the audience and to keep discussing these issues.


Re- Locate project is supported by X-OP. X-OP is a constantly expand- ing network that brings artists, researchers, operators, producers, and cultural institutions together to form a common European platform for artistic production. On the one hand, it strengthens collaboration and common production practices within Europe and an interdisciplinary perspective in art. On the other hand, it reinforces the participants’ mobility with its users who are well-informed on the technological infrastructure. X-OP project is realized between 2008 and 2011 and is supported by European Commission – Culture Program. For a detailed information on X-OP project, see:
www.x-op.eu