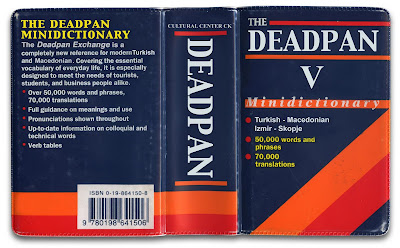 The work presented by the seven TR based artists is the fifth part in a series of international deadpan exchanges, which began in Denmark and Berlin in the summer of 2007. In each of the shows, the artists are actively involved in a give-and-take of deadpan communication… a sort of classic comedy exchange. The work exhibited here at Cultural Center CK by the seven Turkish artists is a reaction to the work of the seven US based artists, who exhibited in Izmir at K2 Contemporary Art Center in April of 2009 for Deadpan Exchange III.


Deadpan is a form of comic delivery in which humor is presented without a change in emotion or facial expression, usually speaking in a monotonous manner. This puts the burden of interpretation on the viewer. Is the scene comedy or tragedy?

From an art historical standpoint, the shows take their cure from the deadpan strategies employed by artists in the early 1970’s throughout much of the world: Yoko Ono, Martha Rosler, Bas Jan Ader, Vito Acconci, Gordon Matta Clark, Lygia Clark and Hélio Oiticica… to name a few. Their works were a formal rejection of the institutions, the world of “Modern Art,” in favor of a more democratic interaction with the work. In many cases, the work–which often boarded on the absurd or tragic–was delivered with a complete straight face, forcing the viewer to decide how they felt about the work.

The Deadpan Exchange Series is probing this ground in a global way. What happens if you start a joke in one country and respond to it in another? Is there an international deadpan language? Is deadpan universal? From a political standpoint, the organizers are concerned with the way the world is becoming increasingly black and white without any room for something gray and muddled. It is important to offer work that actively challenges the viewer to interpret the work for him or herself. And the Deadpan aesthetic offers a way to both engage and challenge the viewer at the same time. The organizers are also interested in bringing a diverse group of artists together from different places throughout the world and starting a dialogue that might not take place outside of formal institutions.

At the end of Deadpan Exchange V, seven Macedonian artists will create reactions to the works of the seven Turkish artists, and these reactions will be exhibited in another country (the location of which is still being determined). There will be 1 more exchange and then a final exhibition in Copenhagen with all the artists’ works in 2012.