I AM HERE, THE TIME IS NOW 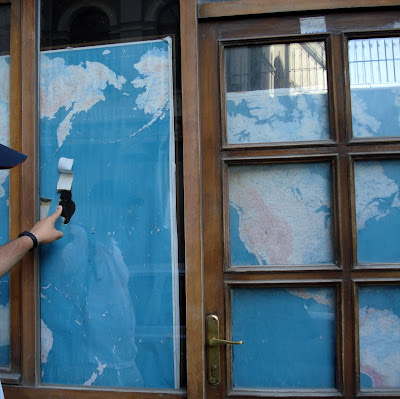 I AM HERE, THE TIME IS NOW
is a synapse, a public forum of ideas through artists created by the European Cultural Foundation (ECF) and artistic director Ong Keng Sen. The ECF seeks to contribute to a political culture in Europe that is built on mutual respect for diversity. It wants to see artistic cooperation turn challenging experiences into creative encounter. Diversity is built on world’s history that we all share but that we translate differently in our individual life. In the public forum 'I am here, the time is now', artists from Europe and beyond reflect about the individual choices they make against the background of their generations in time. They tell a new story of Europe – and yes, an optimistic one.

“I come from Riga, Latvia. In my childhood it was a part of USSR, when Chernobyl exploded my mom told me not to go play outside. So I did.”
Kaspars Groševs, media artist

“We come from a zone of silence. [But] you need to talk loudly and openly if you are to keep safe.”
Natalia, co-founder Belarus Free Theatre

“The soldiers would ask me to draw their portraits in case they died. It was a kind of historical evidence of them. This way they thought they would have a tiny part of history. They told me about their hopes and dreams while I drew them. They liked watching me draw -- it made them feel calm. My purpose was not to shock the audience. I drew for the soldiers.”
Quach Phong, war painter

Time recycles itself. Every generation positions itself as the new generation, the generation who will make the difference, the generation. New dreams, new struggles, new travels.
Time reveals parallels, exposes common fears, common strategies, common enemies in retrospect. But the time is always now: optimism of youth, hope, idealism, politics of fun, self-organised actions of protest.
A fast-forwarding of the eras, 1958, 1968, 1975, 1989, 1993, 2001, 2010, 2012, 2020. The beginning of Vietnam War, the transnational protests which swept across entire Europe, the fall of Saigon, the collapse of The Wall, The European Union, Nine eleven, Istanbul Cultural Capital of Europe, the end of Kyoto Protocol, Perfect Vision.
Breaking points, new marriages, old beginnings.

Instead of the large social cultural narratives, I AM HERE is very much about individual choices and ultimately about empowerment through recognising the power of the human being. The programme provocatively suggests that the individual makes the choice of aligning himself/herself with communities. The programme puts self-awareness into the public arena, the actuality of the self being marked in space and time. The live presence of the self and hence diversity is emphatically, proudly positioned. The understanding of the rich diversity in Europe today is not just from cultural difference but perhaps more deeply, it is from personal difference.

Focusing on the small “I”, this public forum or synapse takes the form of concerts, media screenings, performances, soundscapes, conversations, interviews, lectures. From Friday Sept 12 to Sunday Sept 14, the public is invited to be the audience and encouraged to share in the contexts of these individuals’ dreams, fights and travels.

What is happening in post-soviet Riga? We’ll discover it through the work of Kaspars Groševs, a visual communications student from Art Academy of Latvia. His film Tomorrow is about a man who is going to visit tomorrow. On his way he meets a stranger who proposes a ticket to yesterday, however the man is determined to visit tomorrow.

Listen to the story of the White Cow Krišs Zilgalvis is a performance artist who is part of the collective Auseklic/Usins, which invokes the White Cow. Several prophecies have revealed that on night of 25 August 2007 the position of stars and planets will be favourable to see a unique phenomenon of this century – the White Cow. An old legend tells that once upon a time the White Cow lived together with people but got deeply lost under the waters of the world. The White Cow has seen the Beginning and will see the End, it has watched the first stars, it has experienced continents splitting, it has helped life to come ashore.)

Jump into the crazy communication in the work of visual artists Hazavuzu The collective is presently making waves in Istanbul as they vocalize their way through galleries, clubs, streets (sometimes co-opting sound choirs of locals to join them).

Share the dreams of artists Mohsen Ben Cheikh and Ziad Meddeb Hamrouni Coming from Tunis, they share with you their experiences living in a city where a moderate Islamic environment is maintained through strict vigilance and repression.

Listen to the memories of another era stirred by war painter Quach Phong He painted on the frontline of the Vietnam War, evoking patriotism amongst the battalions through his poetic portraits of soldiers before their last battles.
Perhaps the re-encounter with the Vietnam War in 2008 will recall the European student protests of the 60s which successfully built a transnational public sphere joined over international problems. In these post-nation European times, the international codes of protest such as symbols, rituals and performance acts used to demonstrate the rejection of established cultural codes in one's nation, especially those codes of a former generation, can be instructive once again.

Explore the location with Gülsün Karamustafa Gülsün calls herself an artist from Istanbul. As such she puts great emphasis on the location where the creative process takes place and that noticeably influences her artistic work. Due to her personal differences with Turkish politics at the beginning of the 1970s, she was not in the possession of a valid passport for sixteen years, until the mid-80s, and therefore, unlike other Turkish artists, could not leave her home country.

Counterpointed with Gülsün are younger Turkish artist collectives such as KUTU who have a parasitic exhibition methodology, coexisting with or appropriating mainstream exhibitions through creating exhibitions within exhibitions. Individual art practices in this group are diverse ranging from the banality of everyday nostalgia to generating collaborative gestural interventions in armenian and kurdish minority communities.

Another noteworthy Turkish venture is PiST///Interdisciplinary Project Space which is a non-profit artist-run space which operates in a red light/entertainment district of Turkish pavilions in Istanbul.

Here similarities can be drawn back to the Tunisian sound art duo, Mohsen Ben Cheikh and Ziad, who participated in The Dream City Project in the medina of Tunis. Artists become agents in the reconfiguration of the city and contemporary society. Working with sound samples of traditional craftsmen and fusing these with real sounds onsite to blindfolded audiences; working with a photocopier machine, this duo builds temporary communities with shared experiences.

Central to this weekend activities will be the presence of the entire Belarus Free Theatre This company of brave committed theatre artists from the land that time forgot live under the last dictatorship of Europe in Minsk. Eurepica (a combination of the words Europe and epic) is made up of new playlets of 5 pages each, woven together by the company. 14 playwrights were asked to write about their impressions of Europe.