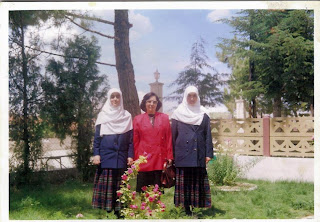 Exhibition in Pecs, Hungary - 100 Reflections of Iszlam
May 28th, 2008
In 2010,Europe will have three cultural capitals: Essen in Germany, the Turkish Istanbul and the Hungarian Pecs. Between East (Istanbul) and West (Essen) Pecs is in half-way, so the call reflects also on unifying Europe and on the diversity of cultures acknowledging the power of imaginative geographies. As today the role of religion is strengthening again both in the search for identity and the political, public discourses, we would like to present these three cities by their common religious heritage.
Islam is the most dynamic world religion today. After Christianity, it is the second largest religion with 1 billion 322 million followers. Islam is so diverse that some even speak today about “Islams”, in the plural. The Muslim mode of life, system of belief and world-views are manifested in the cities: through clothing, architecture, behaviour, commerce and application of law. We would like to offer this diversity – traditions, contemporary problems and local solutions – to the audience with the help of contemporary photography.
All the three cities are influenced by the past or present of Islam while they embody by default hybrid worlds: Pecs (Pecuj) was transformed under the 150 year Ottoman rule into an Eastern, Balkan city whose architectural memoirs are respected treasures today. At the same time, famous ancient Christian casemates are to be found in Pecs and the exemplary common existence of Germans (Schwab), Hungarians, Croatians, the Roma and Serbians.
Istanbul also unifies Christianity and the Muslim past and present because it was once Byzantium which was conquered by the Muslim Ottoman Turks in 1453. It became the capital of the Ottoman Empire, one of the most beautiful cities of Islam. Although since 1923 Turkey is a secular state, today Islam or rather the Muslim mode of life is in the forefront of heated debates. The past and present of Istanbul is symbolized by its geographical location – on the borderlines of Europe and Asia.
Essen is the fifth largest city in Germany. 17 nationalities are living together in the city. Turks, Kurds, Arabs, black Africans and the refugees of war from the Balkans are represented in the largest numbers: the majority are Muslims. The economic recession lead to unusual high percentage of unemployment and to the tension between the different groups and cultures. In Essen, the present of European Islam is formed also by the economic problems.

Curators
Luca Gőbölyös, Balogh Rudolf-prize winning photographer, curator of the “100 views of Transylvania” exhibition, and invited lecturer in the photography at Werk Academy.

Adam Mestyan, historian and Arabist, instructor in Arabic at the Central European University (CEU) and invited lecturer in the history of Islam at ELTE University.
Information from the Exhibition Website